Why There Are No Dogs in Searching for Nora 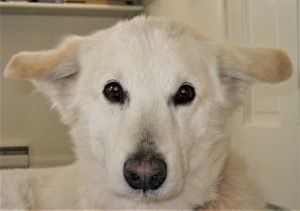 My dog Rex, may he rest in peace.

That’s my dearly departed dog, Rex: a sweet, loyal collie mix who always knew when to cheer me up. Nearly everyone loves dogs, and many people enjoy reading about them and their deep-felt relationships with their owners. Given that, why didn’t I put a dog in my novel Searching for Nora?  It would have been a surefire way of warming up the narrative. A dog could have humanized the humans, led to interesting plot opportunities, and provided Nora with a friend when she desperately needed one.

Ah, and therein lies the rub. I had a photography teacher once who banned pictures of babies and cats. “Too easy,” he would yell. “Try something harder, like a photo of your mother.” For a novelist, I would say that a dog would have been too easy – for Nora, for the story, for me.  The book would have veered off into the comfortable, and that was not what I was doing.

This question came up midway through my writing of the book. Not the dog question, per se, but a similar question. Someone central to the project suggested I take Nora away from the mess of her life in Norway (her hunger to see her children, the unattractive poverty of life in Vika, her demoralizing quest for honorable work) and give her a more glamorous life.  “Maybe she moves to Copenhagen, becomes an opera singer and has an affair with a prince,” this person said.  “Really, does she have to go through all that depressing stuff in Kristiania?”

I wasn’t sure how to respond, but what I felt in my heart was that I didn’t want to just write a story. I wanted to write Nora’s story, as it might have unfolded in the Norway of her day, and true to the Nora that Henrik Ibsen put at the swirling center of his iconic play A Doll’s House. Could Nora have become an opera singer? No, for several reasons: first, Ibsen doesn’t make her a singer. When she needs to entertain the neighbors, he has her dancing a crazy little tarantella that’s more about her sexiness than her skill. Second, what were the odds that someone in Nora’s shoes – with little money, fewer friends and no connections – could have charmed her way onto the big stages of Europe, much less into a castle to seduce a prince? It felt like fantasy, and I wasn’t having any of it.

This issue brought to mind an article I read once about best-selling children’s books. The conclusion was that if you named a children’s series something like the “Pirate Babysitter Lollypop & Puppy Club” you could make millions. Of course, you had to write something engaging that had pirate babysitters and puppies, I suppose. (Why responsible parents would engage pirates as babysitters was beyond me; maybe that was where the puppies got to work.) Anyway, the point was that you could construct the perfect series by including a few popular elements, the story be damned.

So, yes, I could have given Nora a dog. I could have sent her off to sea with the pirates. I could have given her a golden voice and a chance encounter with a prince that would get her gigs at the Royal Opera. In my book, I let the characters Solvi and Rikka imagine such fantasy adventures for the “Forgotten One,” the missing feminist who left her husband and disappeared. But I wasn’t about to write those fantasies into Nora’s story.

And while a dog may seem small compared to a career as a mezzo-soprano, I just couldn’t give her that comfort either. Because I wanted to see what Nora would do when stripped of all she had had in the “suffocating eiderdown” of her life back in Kristiania with her husband Torvald. When she walks away from that world, the most interesting challenge she faces is not how to support herself or worm her way back into her children’s lives, but how to grow into her best self. I wanted her to have to find new ways of relating to the people in her life. I wanted her to learn how to reach out to other struggling women and offer help. I wanted her to learn to love again in ways she would never have imagined before.