What’s in a Book Title? 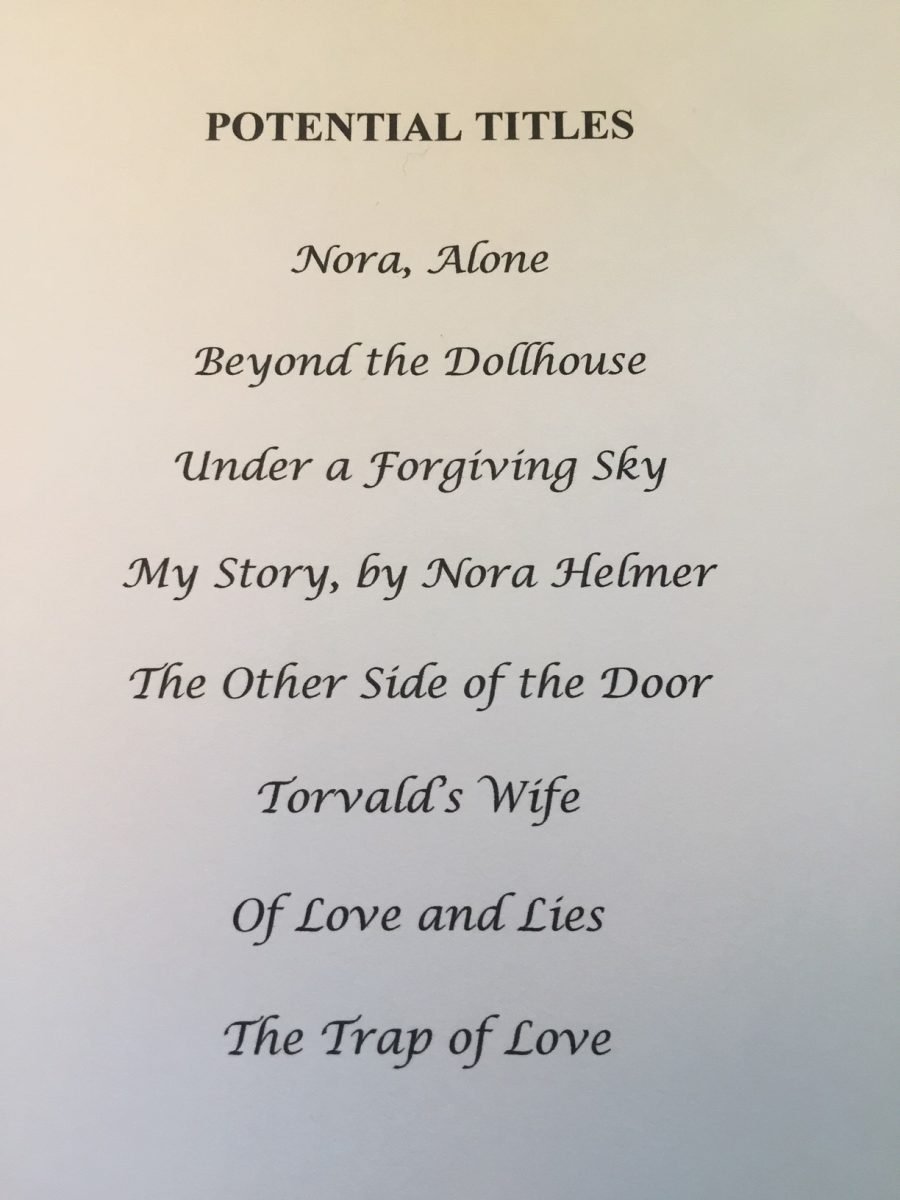 While promoting my novel Searching for Nora last week, I got an interesting question: how did I come up with the title?

But settling on a title for my novel, which is a sequel to Henrik Ibsen’s iconic play A Doll’s House, proved maddening. My main character is Ibsen’s Nora Helmer, a charming, loving, unstable, desperate young mother who walks away from her family at the end of Ibsen’s play.  My book tells the story of what happens to her, and along the way grapples with thorny problems such as a woman’s role in marriage and love, the fate of the marginalized, the loss of children and stability. Lots to convey in a title.

When I started writing, a good friend suggested Out of the Dollhouse. I liked it at first, but as the novel got more complex, that title seemed too derivative of Ibsen’s play, and too limiting. In my book Nora leaves the proverbial “dollhouse,” and then takes on the larger world, surviving through one adventure after another. She struggles to find a place to live, makes friends with radicals, goes underground and undercover, emigrates to America – and that’s just the first half. Along the way I developed a secondary story, set forty years later, about a young university student who becomes interested in the fate of a long lost feminist. By the time I was nearly finished, I had a big book, with two heroines and lots to capture in a title. Out of the Dollhouse just seemed too small.

I toyed with a million ideas: Nora and the New World; Beyond the Doll House; Under a Forgiving Sky; Different Hearts in Different Lands; the Widow of Kristiania; Torvald’s Wife; The Life She Lives; Lies and Liberation; and one I thought Mr. Ibsen himself might have chosen: Love or Honor. And that’s the short list.

One of my favorites was The True Story of Nora Helmer, which I thought was wonderfully ironic, because we can never know the true story of Nora Helmer, after all – she’s a creature of literature, not real life. But, as Jane Austen discovered, irony is often lost on readers, even in something as important as a title.

I soon came to understand that the title should serve a function, and it should do so clearly, without irony or puns or too many obscure references. People needed to read it easily, be intrigued, hear Nora and feel a flicker of recognition. Perhaps it could include a nod toward Ibsen’s play. My production manager suggested I come up with something short – no more than three words, preferably just one, because I was going to have to type the title a million times, say it often, hear it in my dreams. It had to be concise if I was going to survive that.

Concise, however, was a challenge. I’ve never been able to say anything in one word, so I focused on three-word options. When I complained I couldn’t say much in three words, my production manager gently suggested I could add a subtitle, but to keep it tight. Three words for the main title, followed by a bit of a subtitle. “Nothing scholarly,” she said.  “You don’t want people thinking it’s a dissertation.”

I quickly decided the subtitle could carry the reference to Ibsen’s play, but I still needed a catchy main title. As a former newspaper reporter, I knew good headlines were built on verbs; so I wanted my title to have a verb, a little action rather than just an inert idea on the page. And then it occurred to me that the verb could link my two heroines. If someone was searching for Nora, that action could be the bridge.

Finding Nora! It seemed perfect. I ran it past my sons. “Nope,” they said. “Sounds like Finding Nemo.” Plus, the domain name was taken. Back to the drawing board.

I was hooked, though, by the idea of a verb linking the two heroines. If not Finding Nora, then why not Searching for Nora? This resonated with me because I had been searching for Nora the entire ten years I worked on her story. Writing the book allowed me to explore who she was, how she might grow into a better person, who she could become over time. Then I realized the book was the story of three searches: Nora’s search for herself; Solvi’s search for the missing feminist, and my search for both these intriguing heroines.

That is how the book became Searching for Nora: After the Doll’s House. So far, it seems to be working.