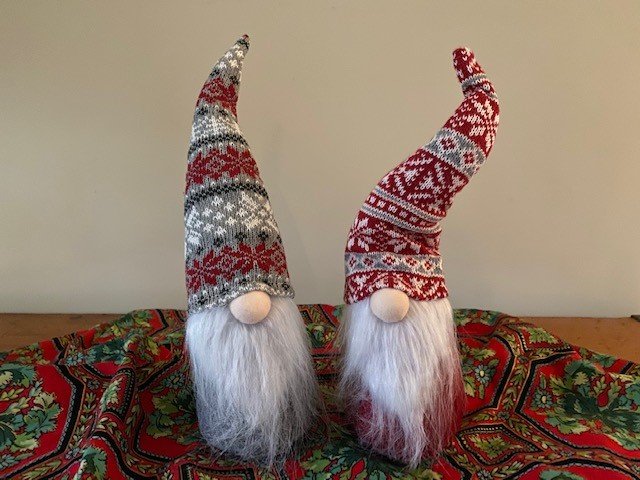 Julenisser waiting for their porridge.

In my novel Searching for Nora, there’s a figure known as a nisse. Nisse are mythological creatures from Nordic folklore popular in Norwegian traditions, particularly around Christmas and the winter solstice. They are little people, between six inches to three feet tall (depending on whom you ask) and they usually help a family tend a farm or house. They are what most Americans would call gnomes, often pictured in breeches and boots, with a colored jacket cinched by a belt, and wearing a tall pointed cap. Male nisse have long white beards, like little old men, and big noses. They reputedly live a long time, sometimes for hundreds of years, which is why both male and female nisser are usually pictured as old people.

In older Norwegian folklore, nisser were responsible for helping care for animals or the garden. As these traditions moved into the nineteenth century, the nisser grew to be more associated with houses and became more like the English brownies, little people who can be blamed for small household calamities like spilt flour or a missing button. The nisser could be angry little creatures. They were famous for punishing those who misbehaved, by either biting or kicking them, or making them dance all night. Because of their tempers, nisser needed to be placated with special foods and care. They were often attached to a particular family.

As part of my novel, the character Nora travels to the American prairie in the company of a Norwegian farm family with several children. They all find prairie life daunting and lonely, as there are few other families around and little real society. To help the children, especially a small boy named Jens, Nora begins telling them stories of the nisser that have traveled with them to Minnesota in the rosemaled trunk. The nisse is blamed for making the baby cry by tweaking his ear, and Nora says sometimes the nisser steal a tiny coal from the stove to warm their beds. The children find these stories reassuring, and often make up their own nisse tales.

I got the nisse from Norwegian folklore, but I gave Nora the idea of imagining the nisse living with them in the sod house from a story my father told me and my siblings when we were young. My dad was in the Navy, and often went to sea for long stretches, which were lonely times for us. He had heard stories about a pair of ants from his own father, and he used those ants to entertain us with adventures that mirrored what was happening for us kids.

In my father’s tales, these ants lived with us and had escapades connected to us as a family. When the Navy sent us to a new post, the ants always inadvertently moved with us, sometimes by hiding in the pocket of my brother’s jacket (one of their favorite spots as there were usually cookie crumbs in the bottom). One of the ants was a large carpenter ant known as Jellybean, and his sidekick was a tiny ant named Marshmelly. They had different personalities and spent most of their time getting into scrapes that echoed what my family was doing. If we went camping in the Sierras, for example, Jellybean and Marshmelly ended up coming because they had been curled in one of the old sleeping bags. Once released at the campground, they enjoyed chocolate bits dropped when we made our s’mores, and faced off with a large forest spider. Jellybean was the responsible one, and Marshmelly the one that got them in trouble. They faced many dangerous situations but, together, always managed to get away and home to the safety of our family.

When my father had to go with his ship to Japan one long summer, Jellybean and Marshmelly accidentally got taken along in Dad’s duffel, then had the run of the ship for several months. They got caught in a missile silo and later tricked a threatening cockroach from the docks of Kyoto. As children, these stories were a window into our father’s experiences and made us feel like a bit of us always went with him.

In Searching for Nora, the nisser help the children feel less lonely, just as Jellybean and Marshmelly did for me as a girl. At Christmas, Jens hopes the Julenisse (the special Christmas gnome) will bring presents, but he will only do so if the family leaves out a bowl of porridge with butter on top. Nora forgets to make the porridge, but in the end the nisse come through. Every family can use some little people (or ants) around to entertain the children, especially a family alone on a cold, windy prairie.