The Inspiration for Rikka 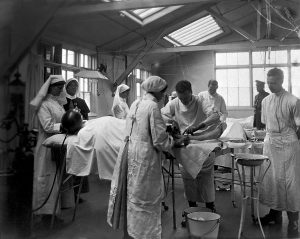 In my book Searching for Nora, there’s a character named Rikka Toft who befriends the heroine of the secondary tale, Solvi Lange. Both Rikka and Solvi are students at the University of Oslo. Solvi’s reading history and works as a photographer, while also searching for her missing grandmother. Rikka studies medicine but spends her free time upsetting the social order as much as possible.

These two friends represent a new generation of women who came of age during WWI and emerged in 1919 ready to change the world. After the armistice, young women across Europe were suddenly challenging conventions – taking office jobs, riding bikes, dancing with strangers, refusing to marry. I was so intrigued by this generation, I had to put them in my book.

Solvi runs off to university against her family’s wishes, yet she carries with her the privilege and perspectives of her bourgeois class. She wears her long curls tucked into a knot at the back of her neck and her dresses down around her ankles. Rikka, on the other hand, first appears scandalously clad in a short tweed skirt, with bobbed hair. They both live in a rooming house for female students staffed by a matron who doles out curfews and rules. Most of the girls are studious and well-behaved, but not Rikka. She may be passionate about becoming a doctor, but she’s also a tough-talking rebel with a dark undertow. When they first get to know each other, Solvi is shocked to hear that Rikka went to war as a nurse alongside her father, who volunteered as a doctor for the British troops and ended up being killed. Solvi, sensing Rikka’s simmering grief, is drawn to her, despite being intimidated by Rikka’s worldly talk and experience. They bond, but it’s complicated.

I based Solvi and Rikka’s friendship on the attachment I had for my cousin Jean Swallow, another fierce advocate for a better world. Jeannie was a year older than me, and also inclined (as I was from an early age) to write stories. But they were very different stories from mine. I wrote about hero dogs and girls on sailboats. Jean would show me stories about things like Nazis herding children into gas chambers. I had no idea why such awful tales came to her; I only knew that my imagination was too bland and simple to concoct such a story.

A few years later, we went together to see Gone with the Wind. Jeannie turned to me at the end, tears running down her face, and said “maybe someday I can write like that.” I noticed that she did not say “we.” I knew then that I would spend my life never quite brilliant or radical enough, always stumbling to keep up with Jean’s incendiary talent and revolutionary spirit. At the same time, however, I knew she needed me, someone stable and predictable to keep her anchored to earth. She was the kite; I was the child holding the string.

In Searching for Nora, Rikka pushes Solvi to try crazy new things, like rhythmic dancing a la Isadora Duncan, and sneaking into wealthy homes to take photos of servant girls working in egregious conditions. At times Solvi feels as if she’s “being dragged down the street by a wild pony.” Rikka smokes, climbs in the window of Solvi’s room after curfew, and advises Solvi to ignore the worried letters from her mother. But Rikka also takes medicine and food to Kristiania’s poor, and sometimes needs to cry on Solvi’s shoulder. Along the way, Solvi grows more independent and Rikka softens. They challenge each other; they fight with each other; they rescue each other.

My cousin Jean matured into a difficult life, choosing to battle societal conventions at every turn. She was gay in a time when it was dangerous to identify as lesbian, and she lost many male friends to AIDs. She struggled with depression and drinking for years, and yet managed to write several books important to the LGBT community, and finally recovered from her alcohol addiction. But none of it was easy. She would tell me of her publishing success, and I would be proud of her but also jealous. She would call me late at night to tell me her latest anger or sorrow, and I would talk her down off the cliff. It was our particular dance.

In 1993, my extended family gathered for Jean’s marriage to her girlfriend of some years. The morning of the wedding, the three of us climbed a hill above Marin, where they lived, and pledged to support each other. Jeannie still felt she needed me, but I believed I was finally handing responsibility for her over to someone else. I hated to admit it, but it was a huge relief.

Despite that happy wedding day, Jean took her own life a year later. It happened on Martin Luther King weekend. I was in New York on a holiday and unavailable by phone. I’ve always wondered if she tried to call me, or whether I could have talked her off the ledge once again. But her friends said she didn’t reach out to anyone. I had seen her just a few weeks earlier and knew it was a dark time for her. I was crushed when she died, but also not surprised. There was something about the messiness and innate tragedy of life that had always been too much for her.

I wish every day that Jean still lived. How she would adore her nieces and nephews; how many more nights should we have stayed up late arguing about books; how often have I longed to show her my work and talk through ideas. She was the first to tell me I could be a writer, the first person who really believed in me, even if she believed in her own talent more. How I wish she could see me now. How I wish I could read thirty more years of writing from her talented pen.

And so that is how Rikka Toft came to life in my book: I imagined her as Jeannie in a short tweed skirt, dark bobbed locks framing her intense brown eyes. Jeannie as she might have been if she had lived in Rikka’s time and place. True to form, Rikka rejects everything conventional and paves a tough new road through life. She is admirable and annoying, selfish and selfless. And she pushes Solvi to be someone bigger and braver than she ever imagined she could be.

It was so lovely to watch Jean come back on stage, climbing in windows, giving Solvi a hard time about her “Isolde curls,” and challenging the status quo at every turn. How I wished I could have stepped into the story to be with them.