Solvi and her Camera 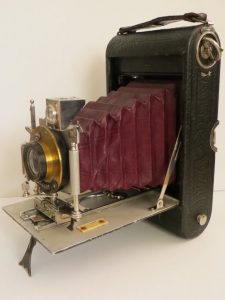 When I was creating the character Solvi Lange, the heroine of the secondary tale in Searching for Nora, I wanted her to be someone trying to capture history. As a young woman raised in a family that kept secrets, Solvi feels like time and memory are eroding away beneath her. Instead of burying the past, she wants to dig it up, examine the remains, trap the images so that they cannot fade. And so I gave her a camera.

I have always been interested in people who create visuals things. I don’t have that gift, so I admire those who see the world through artist’s eyes. I am also interested in those who struggle with their art; who stretch themselves to practice their craft and bend the rules of society to get at what is true and beautiful. I wanted to see if Solvi could do that with her camera.

At the time that Solvi leaves her hometown of Bergen and sets off for university in 1919, the world is undergoing rapid change, and some of that is beginning to be recorded through photography. Cameras were becoming cheaper and easier to use. Everyday people started snapping pictures of their friends and family. Kodak came out with its simple $1 Brownie camera in 1900, and other easy-to-use cameras followed. Not surprisingly, there was an explosion of photography over the next several decades.

Solvi inherits a German-made camera from her father – a botanist who photographed rare plants – after he dies in 1914.  At first she takes the usual pictures, photos of family and friends.  She soon moves on to photographing her family’s maids, so they can give snapshots to their boyfriends as keepsakes. She has the maids change into their Sunday best and pose next to the potted plants in the parlor. But soon Solvi becomes interested in more controversial subjects. In a scene I had to cut from the novel because of length, I sent Solvi out with her camera to capture the aftermath of a bad fire in the city of Bergen in 1916. Solvi spends the day recording smoldering wreckage, returning home with ruined shoes and a new appreciation for what the camera can do.

Soon Solvi is taking photos of the housemaids in their work clothes, laboring in kitchens and standing over wringers in the laundry. She’s both fascinated and disturbed by how hard the maids work, and she tries obsessively to capture their effort. One day she takes a shot from below of a young maid lugging coal scuttles up a narrow stair, holes in her stockings. When Solvi sees the finished photograph, it brings tears to her eyes. It feels like a statement of some kind, notice of a wrong that should be corrected. And so she sets out to correct it.

Solvi’s camera leads her into trouble and discovery and wonderment and, ultimately, into the future. I wish I had Solvi with me here to take some of the pictures I imagined for her, especially the one of several young maids taking linens off a clothesline in a windstorm, the sheets billowing like jibs. Sigh. We will just have to leave it to our imaginations.