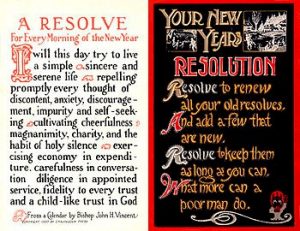 New Year’s resolutions are as old as the Romans (according to Wikipedia), so it’s likely that Nora Helmer might have considered some self-improvement around this time of the year. The image above is of a New Year’s resolution card from 1915, and I love how it starts with the statement “I will this day try to live a simple, sincere and serene life.”

If my character Nora were to adopt a New Year’s resolution, the idea of living a sincere life would be a good place for her to start. Telling the truth is her particular challenge: she’s a quick and able liar, prevaricating to nearly everyone about issues large and small. Beyond that, she has lived her life hiding what she does, masquerading as everything from an Italian peasant girl to an old widow, and keeping secrets from the people she loves most.

Nora was created by Henrik Ibsen, the Norwegian playwright who spun his iconic play A Doll’s House around this charming, maddening, deceiving woman. I wrote Searching for Nora: After the Doll’s House because I found Nora both heroic and deeply flawed, and I wanted to explore how someone like that would struggle to overcome her worst traits. My readers tell me it is Nora’s lying that they find most troubling. If Nora’s New Year’s resolution should have been to stop lying, I thought it would be interesting to peer beneath the surface of her many prevarications.

Lying is a complex topic. Most of us (if we are honest) occasionally lie for minor reasons, either telling white lies or withholding information that might upset someone or make our life difficult. But lying as a regular practice, as Nora does, can be disturbing to readers who prefer a less complicated heroine. And yet, we are also drawn to stories of those who overcome their weaknesses and rise to new challenges.

For Ibsen, Nora’s lying is the key that unlocks her secrets. Every time she lies in Ibsen’s play, the audience gets a glimpse of something she is keeping from others. Nora lies because it is the only way she can get hold of the levers of power in her marriage and the late nineteenth-century society she inhabits. Ibsen, who closely observed women throughout his life, recognized that those with little authority often lie and manipulate to get what they need. He also saw that women of his day were significantly less powerful than men, disadvantaged by the legal system and entrenched tradition. For Ibsen, Nora’s lying is part rebellion, and he loved rebels.

Ibsen was also interested in the clash between appearance and reality, and in the play, Nora lies to create a smokescreen around her questionable behavior so she can continue her desperate mission to save her family. She lies about forging a signature for a loan, and about taking in work such as sewing and copying (well beneath her station) to pay off that loan. She tells herself she does it for love, but when she finally steps out from behind that smokescreen in the last scene of Ibsen’s play, she struggles to articulate her moral code. She only knows that she does not accept all that men, the law, and the church have judged to be moral. And she doesn’t understand why “doing something for love” has gotten her into such trouble. Ibsen leaves Nora floundering, her moral compass spinning uselessly. I wrote my book so I could send this rebellious, non-compliant woman out into the larger world to see what she would do and whether she could figure out what her morality should be.

There are various ways to lie, and Nora explores them all. She leaves her home and marriage at the end of Ibsen’s play, taking on the world with little beyond her education, her instincts and her will. She sets off resolving to be a better person, but the world is not ready for her and cannot accept a woman who behaves as she does, so she spins new smokescreens, adopts new masquerades, hides information that might turn people against her. Lying becomes her survival mechanism, her refuge, her best strategy. She lies because she dares not tell her truth.

Over the course of my book, however, Nora comes to understand lying’s corrosive power. She regrets the web of lies she has built and yearns for a sincere life, even as events conspire against her. I wanted to see if she could live out her rebellion and, at the same time, learn to stand honestly before the world. For Nora, it takes more than a New Year’s resolution. Indeed, her effort to cast off this troubling habit proves to be the crucible of her life. She can only be free when she finally has the courage to define her own moral code and live it openly in a hostile world.