Nora and Solvi, the Movie 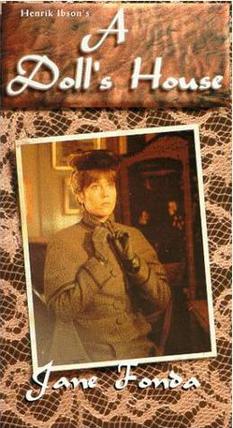 The actress Jane Fonda recently commented in an interview in the New York Times that she would like to play Nora, the famous heroine from Henrik Ibsen’s play A Doll’s House. Nora, of course, is also the heroine of my novel, Searching for Nora: After the Doll’s House. When friends saw Fonda’s comment, several of them fired off emails: “Send Fonda your book! She wants to play Nora!”

In the New York Times piece, Fonda admitted she had played Nora once before, in a 1973 film directed by Joseph Losey. But, as she told the Times, “I didn’t dig deep enough.” I thought Fonda did a respectable job as Nora in that first encounter, and the film is well-worth seeing, especially for the beautiful Norwegian setting in the old mining town of Roros. But Fonda is right, she could have dug deeper. With Ibsen, you can always dig deeper. His play, which is about a failing marriage, is a labyrinth of social complexities. It takes a rare young woman to play Ibsen’s Nora with depth, and it would take someone with wisdom and seasoning to play Nora as I imagined her in my novel.

Now that she’s 82, Fonda’s a tad old to play Nora as the 30-something wife and mother of Ibsen’s drama, but if someone made a movie of Searching for Nora, she could play the older Nora who shows up for the final scenes of my book. But we would still need a younger actress to play Nora during the years of the main action: someone youthful but also a little world-weary, someone beautiful and expressive, someone charming yet tough. Someone secretive.

Nearly once a week somebody asks me if I’ve thought of pitching my book for a movie. My husband (my faithful champion) thinks about it all the time. He’s been on the lookout for the right actress for years (his latest fave is Millie Bobbie Brown), and he has offered many times to play Anders. The other day he suggested we start working on a “treatment,” which is a document that suggests how the book could be turned into a movie. I have no idea how to write a treatment.

I do know what the movie could look like, however. When I was working on the book, I often resorted to thinking about it as a movie, because it helped me imagine the next scene and think through what needed to happen next. Where does the scene start and who is in the frame? Where are we, what is in the background? What does this moment feel like and how can I convey that? What is the action; what needs to be said or left unsaid? I was often surprised how easy it was for me to visualize the book as a movie, but the truth is, we have all seen many, many movies. We have a pretty good idea how they are stitched together. We understand things like perspective, pacing, character and plot from watching so many movies. We also understand color palettes, and shadow and light, and music. It’s quite a treasure trove, what we know from a lifetime with movies. I would go to sleep at night running scenes through my head.

So am I sitting down to write my treatment? Not yet. What I know about Hollywood – from the few acquaintances who have waded into those murky waters – is that Hollywood is a total crapshoot. I met a movie producer some years ago who told me “no one does costume dramas anymore.” A few months later, Downtown Abbey appeared, overturning that paradigm. Still, there are countless stages to putting a movie deal together, and at every hurdle the majority of projects fall away. Success is elusive, and seems hopelessly unpredictable. Even if someone – Jane Fonda, for instance – called to say she wanted to do Searching for Nora as a movie, it would be foolhardy to get excited.

Until we can get a director and big star interested, I invite my readers to imagine the Nora and Solvi movie for themselves. Think about Nora’s life in the rooming house, her trip across the Atlantic and west, into the empty, beckoning prairie. Imagine Solvi and Rikka sneaking into the kitchens of fancy homes, photographing maids and cooks at their tasks. It will come to life for you, if you let it.