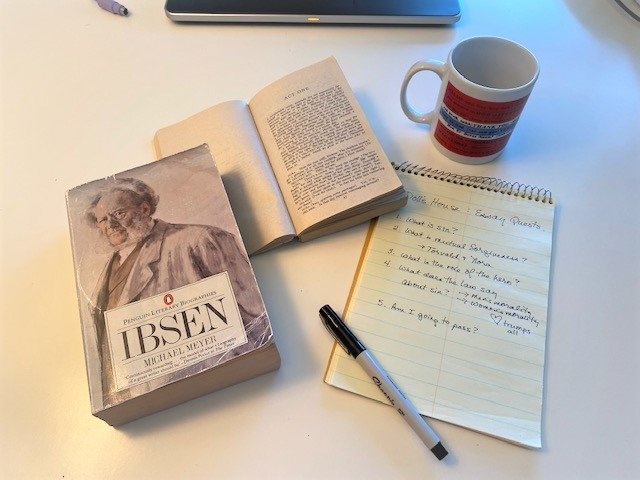 Study notes for the essay questions.

I had the privilege recently of talking with a group of British high school students who were studying Henrik Ibsen’s play A Doll’s House. Their teacher, a wonderfully literate young man, invited me to speak because he thought my book Searching for Nora: After the Doll’s House could help his students better understand the historical and literary context of Ibsen’s play, something they would need to write about during their upcoming A-level exams.

As an English-teacher-wannabe, I loved this idea. The teacher sent me a list of essay questions and suggested I pick several to discuss. I wasn’t sure I needed prompts – as I had spent years studying Doll’s House and Ibsen’s Norway while writing my book – but I was game.

Well, all I can say is that the essay questions sent me tumbling down one fascinating rabbit hole after another, discovering things in Ibsen I hadn’t considered before.

Let’s start with the crime at the heart Doll’s House: a secret forgery of a signature on a loan, committed by Nora, a naïve young wife desperate for money to save her husband’s life. (The fact that Nora can’t get a loan in her own name tells you a lot about the status of women in Ibsen’s day.)

When her husband Torvald finds out, he turns on her, bitterly condemning her as a criminal and a liar. That she did it for love doesn’t matter to him; he’s horrified that his honor and social status might be torpedoed by her crime. A bit later, when Nora is let off the hook by her lender, Torvald tries to salvage his marriage by forgiving her. But for Nora, who has suddenly seen him in a new and unflattering light, his forgiveness feels hollow. He promises take her under his wing, not just as wife again but also as child, to teach her how to live in the world. She pulls back, recognizing that his forgiveness is little more than a self-aggrandizing effort to reassert control over her.

And there is nothing mutual in Torvald’s understanding of how forgiveness might save his marriage. He doesn’t think he did anything wrong, so he cannot imagine needing Nora’s forgiveness. In truth, the last scene of the play seems to turn on this very issue, as if Ibsen is signaling that forgiveness must be offered with humility and love, free of conditions or qualifications, if it is to be genuine and redemptive. Without true forgiveness – or any inkling by Torvald that he might need forgiveness for pushing Nora to such a desperate measure – Nora cannot stay in her marriage, as so she leaves.

Another interesting question was “Sin leads to punishment,” which sent me spiraling down into the very nature of sin in Ibsen’s play. In their final argument, Nora and Torvald tussle over the difference between women’s morality (which puts love above honor) and men’s morality (where honor and law trump love). This was a theme among women’s rights activists in Ibsen’s day, and the debate was destabilizing common notions of right and wrong. Should Nora be jailed for committing her small, victim-less crime in order to save her husband’s life? The law said yes, but Nora knew in her heart that she – and most other women – would do it again without a qualm. Nora recognizes a fundamental unfairness beneath the issue of sin and punishment. Who gets to say what is sinful, she wants to know; who gets to write the law? The women’s movement has been asking such questions for decades. And don’t even start me on who gets to levy the punishment.

Another fruitful prompt was “Rebellion is always corrupt.” Really? Most of Ibsen’s heroes are one-step outside of the law, as scholars have observed, and Ibsen considered rebellion necessary for social change. Is an action that may be unlawful necessarily immoral if it is needed to shake-up the world and bring reform? Is that corruption, or is it what civil rights leader John Lewis called “good trouble”? Ibsen knew that the status quo was often the seat of deep corruption, which was partly why it was so entrenched. But he also knew (living only a few generations after the French Revolution), that a justifiable rebellion could start with hope and end in a bloodbath. Perhaps that was why Ibsen was more interested in individual reformers trying to rewrite the law rather than angry mobs lopping off heads.

I also had fun thinking about “Love is invariably possessive.” What does it mean to be possessed by those who love us, and whom we love? Torvald thinks he loves Nora, and he knows he legally possesses and is responsible for her, as he possesses his children. Yet for Ibsen, setting Nora free from her marriage was essential to her growth as a person. But should that mean that Nora must avoid love in the future? Is her singleness the only way she can retain her autonomy? Good question, one that many women the world over still struggle to understand.

I always knew Ibsen was a man ahead of his time, but these essay questions revealed to me just how far ahead he really was. Light years.